Use of cookies on this web site: Greylands Guest House collects no personally identifiable data in cookies. However, a number of social media and search engine companies place tracking cookies without our consent or co-operation. If you wish to avoid tracking, please read our cookies policy, where you will find links to resources that will help you set your browser accordingly.
Greylands Guesthouse Cookies Policy

Use of Cookies on this Web Site
Greylands Guesthouse site uses only one cookie. It is a session cookie, which is deleted at the end of your browser session. It holds no personally identifiable data relating to our site visitors, other than the broad geographical location. This serves to ensure the site delivers the correct information in terms of local contacts, currency and taxes.

No personal data is ever held in a cookie on our web site.

However, a number of social media sites and search engines use practically every web site for tracking cookies and so called Interest Based Advertising. They do this without our consent or co-operation. While we make strenuous efforts to prevent them from doing this, their evolution is such that they can generate new ones faster than we can block the old ones.

We strongly recommend that if you do not want every moment of your web browsing catalogued and analysed, you should use the controls available in your browser to prevent tracking and to block third party cookies.

To get more information and help on how to use these blocking tools, here are some links:
privacy.net
Privacy Badger
Disconnect
AdBlock Plus
Firefox Tracking Blocker Instructions
Firefox Cookie Manager
Ghostery Tracking Blocker for Chrome
Managing Cookies in Chrome
Tracking Blocker Advice for Vivaldi

image goes here
Background
Llandrindod Wells is Wales' most central town. Known locally as "Llandod" it was developed as a spa town in the 19th century, and then benefited from a further boom in the late 20th century as a centre of local government.

The "healing qualities" of the local spring waters attracted visitors to the area during the mid 18th century. As a result the town enjoyed an economic boom and a number of hotels were built. During the "season" between May and mid-September, visitors to Llandrindod would take the waters at the pump rooms at the Rock Park and Pump House Hotel entertained by orchestras, and in its heyday the resort enjoyed a vast array of activities ranging from golf to horse racing! It is estimated that at its peak, the town attracted some 900,000 visitors a year.

Most of the towns architecture dates from the boom periods of the Victorian and Edwardian eras when ornate hotels and shops were built including the Albert Hall theatre. There are also buildings in the Art Deco style including two striking former garages. Notably, Tom Norton's Automobile Palace has a beautifully preserved curved frontage. In the early 20th century it was possible to go there and buy an aeroplane over the counter before flying it home with only the most cursory instructions in the field behind. This magnificent building is now home to a number of businesses and the National Cycle Collection.

The two World Wars of the 20th century saw visitors of a very different kind descending on Llandrindod, when soldiers on training courses were billeted in hotels and boarding houses. Also refugees and wounded soldiers were accommodated in the town.

During the 1970s the mid wales area became popular with hippies and those seeking out an alternative, artisan lifestyle. Many of these settled permanently in the region, and in Llandrindod one of the first whole food shops and cafes in Wales was established, and is still going strong today. Other settlers have created a wealth of craft industries around the town and there is a relaxed atmosphere conducive to creativity.

The historic Rock Park in the town and its man-made lake remain popular places to visit. In the centre of this lake, used for fishing and model boating, is a striking sculpture of a water serpent and leaping carp. The scales for these sculptures are made of thousands of copper plates initialled by local people and visitors during construction of the work.

Today Llandrindod is a busy market town, holding an open-air market once a week on a Friday, and being in a central location is a thriving conference and business meeting destination. Indeed, following devolution in Wales, Llandrindod has developed a reputation for being the place where important decisions are made by political parties.

The town boasts an international standard outdoor bowling green dating from 1912 which regularly hosts national and international events, along with a newer indoor bowling centre. Llandrindod hosts the Heart of Wales Walking Festival annually, the Victorian Festival at the end of August, and is a regular venue for the start/finish of many national car, bike and motor cycle rallies.

If you are looking for a comfortable, friendly place to stay with good access to the Llandrindod Wells area, Greylands Guest House in Llandrdindod Wells offers a convenient local base with single, double, twin or family rooms, modern facilities and a quiet location.

Greylands Guest House offers plenty of room, a warm welcome, great breakfast, close to many activities and places of interest near or in Llandrindod WellsThere is plenty here to interest walkers, cyclists, bird watchers, motorcyclists, anglers, golfers and bowls players. The scenery and wildlife variety in the area is outstanding and there is plenty to do whatever the weather.

For reservations call us on 01597 822253 or click in the header of any page to email llandrindod_wells@greylandsguesthouse.co.uk.

The history of Llandrindod Wells is linked to the health giving waters which it has to offer. It is therefore surprising to find that, although the beneficial effects of taking the waters were known to the Romans, the development of the town did not take place until the mid 19th century with the coming of the railway.

The town then grew at an astonishing rate, as the taking of the waters became a fashionable part of Victorian Life. However when tracing the history of our town and the surrounding area, the Roman occupation of Britain provided the first evidence of spa waters in the area.

The best known Roman settlement in the area was situated at Castell Collen, just outside Llandrindod Wells. Today it is an important archaeological site. As already mentioned, the health giving benefits of the many types of waters coming from local springs were already known to the Romans but it was not until the end of the seventeenth century that the saline springs were mentioned in local reports from the area, although no development of note followed.

At that time the town of Llandrindod Wells did not exist and the area comprised just a few scattered farming communities, the Llanerch Inn and two 13th century churches, both of which still see regular worship. The one is the former parish church, which is almost 1,000 feet above sea level and overlooks the present town and the other, Cefnllys Church, just over a mile from Llandrindod Wells in a beautiful and remote beauty spot known locally as Shaky Bridge. 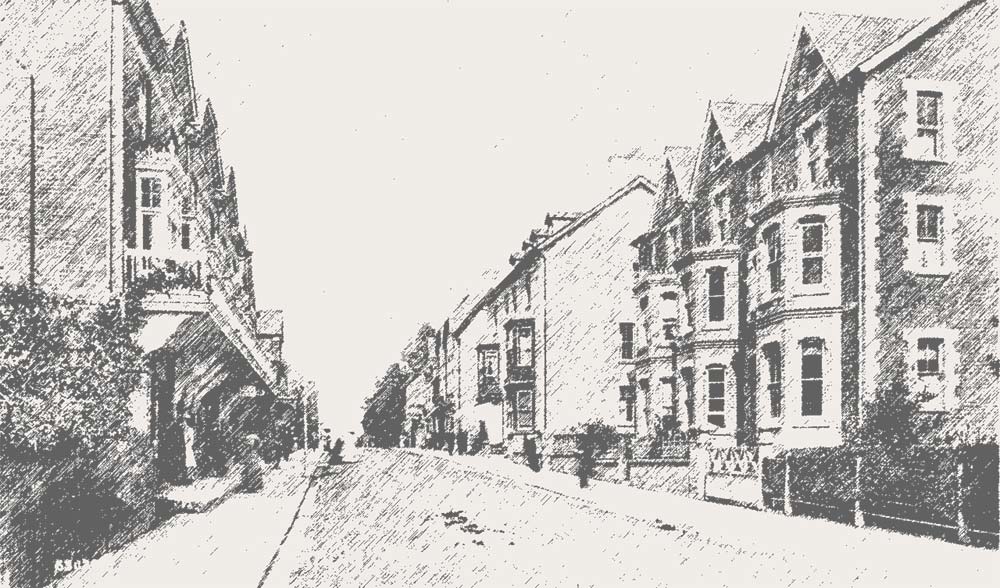 In 1749, a gentleman called Mr. Grosvenor, an astute and far-sighted entrepreneur, bought and extended a few local houses to encourage visitors and, more speculatively, built a large hotel overlooking the present lake and just below the parish church mentioned earlier. With rooms for several hundred guests it offered a wide range of facilities for visitors, including hairdressers, milliners, glovers etc.. For entertainment there was billiards, racing and rooms that catered for balls and assemblies.

Of course, the local spring waters could be sampled, encouraged by a work on the beneficial effects of taking the waters, which had been prepared by Dr. Wessel Linden in 1756. This enterprise was open for about forty years but during this time acquired a somewhat dubious reputation and the building fell into disrepair and closed some time after 1787. The site of the hotel is now occupied by the Hall Farm, nestling beneath the Old Parish Church.

The area then reverted to its former anonymous state until the coming of the Central Wales Railway in 1865. The railway made the area much more accessible and coincided with the Victorian fashion for taking the waters.
The town began to grow, only slowly at first but speculators soon saw the potential offered by good rail access, a bountiful supply of building land and the profusion of medicinal waters.

In 1880 Radnorshire County Council established its offices in the town and the phenomenal growth of the town was now well under way.
Hotels, apartments, new treatment centres, two pavilions, a golf course, bowling and putting greens and a 14 acre boating lake were all built within a few years to cater for as many as 80,000 visitors a year.

These visitors, who represented in the main the gentility from all over the land, brought their own entourage of servants, further swelling the numbers in the town. Local papers listed week by week the names of visitors resident in Llandrindod Wells, reflecting the importance not only of being there but of being seen to be there. The growth of the town continued unabated into the early twentieth century, with the railway at one stage running through trains to destinations as far apart as London, Birmingham, Manchester and Liverpool.

However, the outbreak of the First World War saw a drastic reduction in the numbers of visitors and the area was slow to recover after the cessation of hostilities. Also the depression, followed by the growth of seaside holidays, which were becoming more readily available to the ordinary working people, saw the decline continue. The Second World War heralded what appeared to be a terminal decline in the popularity of visiting the town and taking the waters.

Fortunately, Llandrindod Wells saw an opportunity to consolidate its role as an administrative Centre, and established a light industrial base in the town. Increased housing to encourage new businesses, and a good range of shopping facilities, enabled the town to grow at a steady and sustainable rate.

Recent years have seen a welcome increase in visitors holidaying in the town, and Llandrindod Wells boasts a variety of accommodation to suit all tastes and pockets, including large, well-appointed hotels, licensed guest houses, bed and breakfast, farmhouse accommodation, caravan and camping facilities.

There are many regular attractions to cater for visitors, the best known of which are Drama Festival Week at the beginning of May each year, and the Victorian Festival at the end of August. The Royal Welsh Show, the largest agricultural show in the U.K., is held in July each year at Llanelwedd, six miles south of Llandrindod Wells and is an extremely popular family venue.

As to the future for Llandrindod Wells, there are plans to develop the former Rock Park Spa and provide up-to-date treatment as a Hydrotherapy Centre. This will make full use of the beneficial effects to be obtained from the local mineral waters. Improvements in the Rock Park plus the new 'Heritage Trail', mean that Llandrindod Wells can look forward to the 21st century with a sense of excitement and optimism. 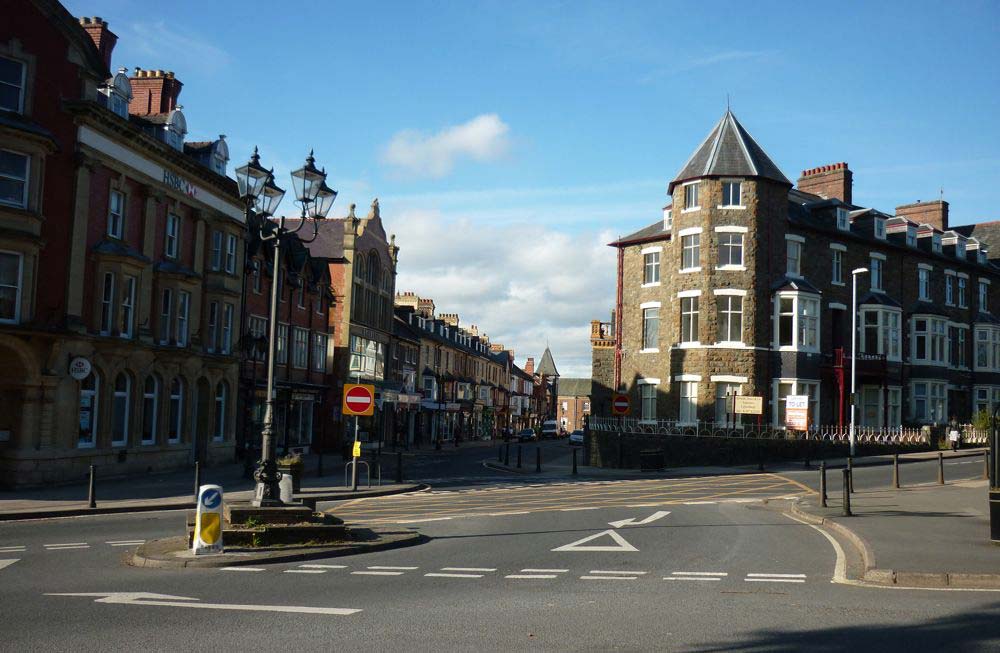